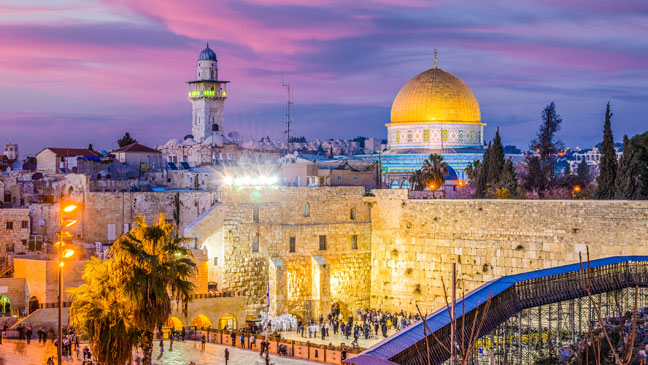 The climate of the Mediterranean and its proximity to densely populated countries within Europe have made the nations bordering the Sea extremely popular for tourism. Spain, Italy, and Greece come to mind immediately, and increasingly Turkey, but there is a jewel at the eastern end of the Mediterranean Sea that can be overlooked. Israel not only offers excellent value for those wanting a coastal-based holiday, but it also has a history as rich as any. Its significance to three of the world’s major religions cannot be underestimated, and travelers interested in history and culture will find much to see and do.

Ben Gurion Airport in Tel Aviv is the main airport for international travel, although there is a smaller airport in the south serving Eilat. Israel has been conscious of the importance of security and the safety of visitors for many decades. As a result, its national carrier, El Al has proven to be extremely thorough in ensuring its flights pose no risk whatever. Traveling within the country itself poses no safety issues either.

Israel is a relatively small country, over half of which is desert, yet it actually exports fresh produce such as tomatoes, an indicator of its advanced agricultural technology. Its Mediterranean coastline stretches 170 miles with sophisticated cities like Tel Aviv, offering a vibrant nightlife, top quality hotels, and fine cuisine. Those keen on scuba diving will find few better places than the coral reefs in the Red Sea just offshore from Eilat on its southern edge. Yet the seas are just a small part of the story of Israel.

With over 300 days of sunshine annually and mid-winter temperatures rarely much below 20ºC, Israel is an all-year round destination and a great escape from winters further north and west. It offers excellent value, both in flight costs to get there but also in how far tourist money stretches while exploring its many attractions.

This iconic city is sacred to Jews, Christians, and Muslims. It is difficult to imagine a satisfactory solution to the political argument over the City, but the United States of America has now recognized it as Israel’s capital whereas other countries still regard Tel Aviv as capital. Visitors to Jerusalem can enjoy a number of landmarks: the Dome of the Rock, the Western Wall, al-Aqsa Mosque, and the Church of the Holy Sepulcher, while others may seek to retrace the steps that Jesus took hauling his cross before the crucifixion.

The architecture of Jerusalem illustrates the rich history of the region: Persian, Roman, and Ottoman influences are all evident. There is history at every turn in Jerusalem with over 230 museums adding to its attraction, the most per capita of any country in the world.

Bethlehem is the next natural stop after Jerusalem, the birthplace of Jesus Christ and a ‘’must’’ for all Christians visiting Israel.

Masada and the Dead Sea

Masada is a rock plateau that stands above the Judean Desert close to the Dead Sea. It is a place where Zealots seeking refuge from the Romans made their home in the first century AD. Herod the Great had built two palaces there a century earlier, but its fame relates to the siege by Roman troops. At their highest point, the cliffs rise 400 meters above the surrounding land. Almost 1,000 people took refuge from the Romans who finally found a solution.  They moved huge quantities of rock to create a manageable slope up which their army could reach the summit.

As soon as it seemed inevitable that the 8,000 troops would succeed, the order went out for everyone to commit suicide. Just a handful ignored the instruction and hid from the Romans. They survived to tell their story.

Excavations throughout the second half of the 20th Century have revealed an interesting site with cable car access ensuring tourists are easily able to visit this UNESCO World Heritage site.

The proximity of the Dead Sea means that these two desert locations are natural partners. Floating in the salty water is an experience not to be missed. The Dead Sea forms part of the border with Jordan with its surface 430 meters below sea level. Commercial use of its water and the almost complete lack of rainfall has meant the Sea is slowly shrinking.

Stand looking out to the Red Sea in Eilat, the extreme south of Israel, and you can see Egypt a short distance to the right and Jordan a simple walk left along the beach, though access is forbidden. Look further to the right of Jordan and that left shoreline of the Red Sea is Saudi Arabia. Scuba diving in the Red Sea is a delight, but those heading out on a boat to dive are likely to need to take their passports because the trip goes into Egyptian waters.

North and West of Jerusalem:

Tel Aviv is a very modern city with a lot of appeal for those wanting to enjoy the best of Israeli cuisine, nightlife, and accommodations. There are other settlements perhaps richer in history including Acre, where records show there was a settlement dating as far back as 3000BC. The old city is a UNESCO World Heritage site and is located beside the modern city.

Nearby Haifa is a major seaport and also the port of entry for those visiting on cruise ships, often arriving from Cyprus.

Those wanting to enjoy a region that rarely welcomes the crowds that head for the sites already mentioned should look at the region of Galilee in the north. It is a fairly mountainous region and greener than almost anywhere else in Israel. There are some interesting landmarks such as the ruins of the Crusader Montfort Castle with lovely views of the surrounding area.

Nazareth in Lower Galilee is regularly mentioned in the Bible with reference to Jesus and Mary. It has a significant Arab population, getting it the nickname of ‘’Arab Capital of Israel.’’

North of Haifa near the border with Lebanon, Rosh Hanikra is a white cliff with a series of grottoes created by the sea over centuries. A short cable car ride down to sea level allows tourists to explore the grottoes and their waters. This place is a photographer’s dream with the contrasts of blue and white.

Israel offers a holiday of infinite variety. There is something for everyone: those wanting an active holiday, tourists simply wanting to relax and enjoy the sun, and of course travelers passionate about religion and culture.