Skip to content
HOME > ARTICLES > NEWS > How Does COVID-19 Compare to Past Pandemics? 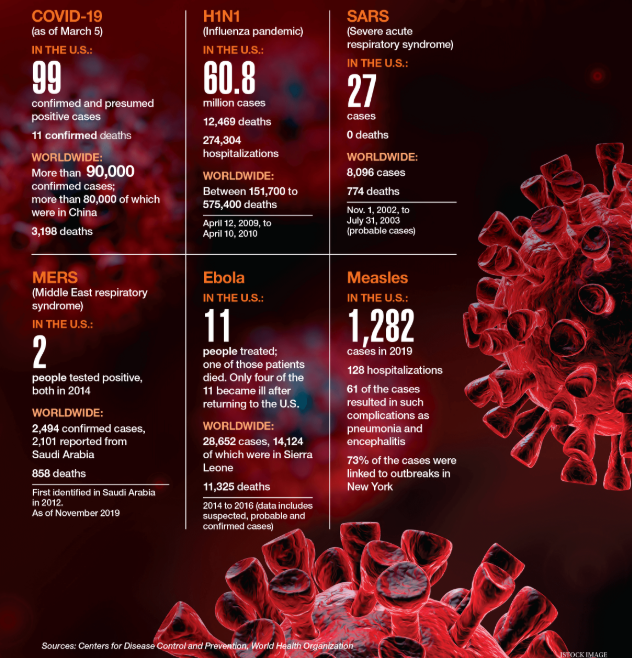 How Does COVID-19 Compare to Past Pandemics?
By: Praachi K. Verma

After the concept of civilization emerged, the increased contact within different populations of humans, animals, and ecosystems paved the way for the spread of infectious diseases. The small and dispersed population of the pre-globalization era helped to contain the spread of these illnesses. However, cross-continental trade and travel soon changed the ecology to act as a driving force for the global outbreak of these epidemics. Pandemics have ever since persisted throughout human history.

After the World Health Organization (WHO) designated the novel coronavirus a pandemic, desperate measures have been implemented by more than 100 countries across the world to contain and map its spread. With the confirmed cases crossing the 2 million mark globally, it’s natural to compare it to other historical pandemics that reshaped the history of mankind.

We all know that the bubonic plague, or the black death of the 14th century, that killed more than 200 million across the world was the most lethal pandemic of all.

The smallpox pandemic comes second as one of the deadliest pandemics. It has claimed more than 50 million lives worldwide. The first-ever vaccine was developed against this disease and until today, smallpox is the only human disease that has been successfully eradicated.

Before we compare COVID-19 to the other deadliest outbreaks, it is important to discuss certain metrics that define the impact of a particular disease.

R naught (R0) is a mathematical equation to calculate the average number of people one sick person will infect. The range for COVID-19 is 2-3. R0 represents the epidemic potential of a pathogen, but the numbers are highly situation-dependent. Situations like dense population, poor socio-economic conditions, the prevalence of malnutrition and other illnesses, and climatic factors increase the intensity of disease outbreak. R0 is a useful metric for health authorities, as an R0 lower than 1 causes the disease to die out in a population. Since there is a lot of uncertainty about the novel coronavirus outbreak, things become challenging for public health agencies to figure out how to effectively lower the R0.

CFR, or Case Fatality Rate, indicates the number of people who have died after contracting the disease. This rate differs according to location, lifestyle, and age. For instance, the CFR for COVID-19 in China has been 4%, while in Italy, it is close to 10%. 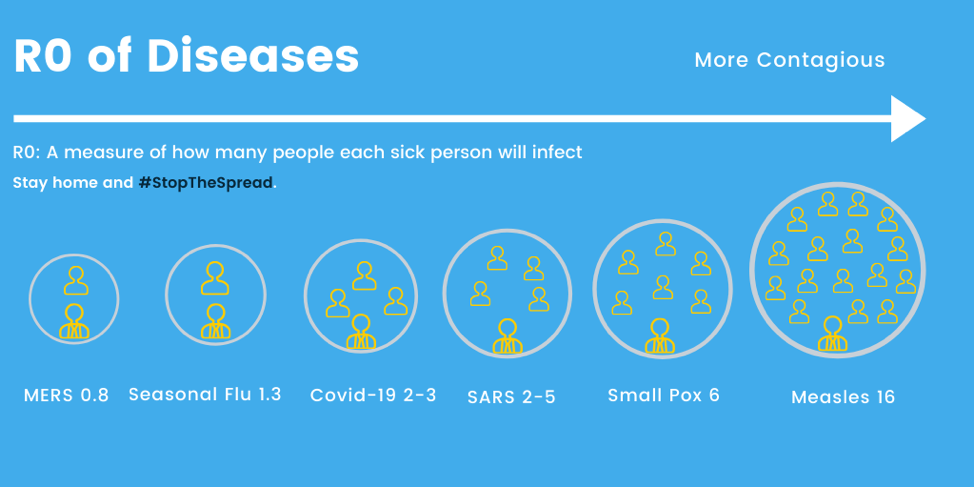 The influenza pandemic of 1918, which caused close to 50 million deaths worldwide, was the third deadliest in the history of pandemics. Though the COVID-19 outbreak is not caused by the influenza virus, according to the Centers for Disease Control and Prevention (CDC), the scale of the 1918 influenza strain might be the best match to understand the pattern of COVID-19 outbreak.

With an R0 of 2, COVID-19 is slightly more infectious than the Spanish Flu. While the 1918 flu was more widespread and mostly affected the younger population (20 to 50 year-olds), COVID-19 is more dangerous for older adults.

The H1N1 viruses were the ancestors of H2 & H3 variants. That being said, when H3N2 first emerged in 1968, people who were over 50 had their immunity set by other similar viruses that circulated since 1918. The improved health care system coupled with the developed immunity of the aged population resulted in a lower CFR of the H3N2 as compared to the 1918 outbreak.

Nevertheless, the Hong Kong Flu was one of the biggest flus of the 20th century. In comparison to the 1968 flu, even with a higher CFR, COVID-19 is less widespread and has resulted in fewer deaths so far.

SARS, or Severe Acute Respiratory Syndrome, is another type of coronavirus that was identified in 2003. This droplet infection was passed from bats to humans to infect 8,098 people across 17 countries. Unlike COVID-19, contact tracing was effective with SARS as severe symptoms made it easier to identify and contain the infection. COVID-19 has already claimed more lives than SARS and in comparison, COVID-19 is more widespread and has a lower CFR.

As per experts, SARS virus lacked the fitness to persist in the human population, which eventually led to its end in July 2003. On the contrary, COVID-19 is capable of spreading and thriving on human bodies.

The Swine Flu, or H1N1, was a novel strain of the 1918 flu virus back in 2009. Just like COVID-19, there was no immunity at the start of this outbreak. Swine Flu was declared a pandemic in June 2009 and even with a lower CFR, the disease claimed over 284,000 lives worldwide.

Unlike COVID-19 which affects the aged population the most, children in the age group of 5 to 19 years were the most affected group with Swine Flu. COVID-19 also has a higher CFR and longer incubation period as compared to Swine Flu.

MERS, or Middle East Respiratory Syndrome, infected the human population via contact with infected camels in the Arabian Peninsula. MERS has infected close to 2,494 people across 27 countries and has claimed 858 lives.

Compared to MERS, COVID-19 is more widespread, has resulted in more deaths worldwide, spreads more effectively among humans, and has a lower CFR.

The Ebola virus disease is a severe acute viral illness that predominantly spreads through body fluids like sweat and blood during the later stages of the illness. Hence, Ebola is less contagious than COVID-19. Also, the severe symptoms made methods like contact tracing and isolation effective against the containment of this disease. Ebola has spread to 10 countries and has infected close to 31,000 people.

However, the virus can lie dormant for extended periods and hence reinfections surfaced months or even years after the initial outbreak. In comparison to Ebola, COVID-19 is more widespread and has a lower mortality rate.

The seasonal flu strikes every year, but its strains mutate each year. Though seasonal flu is the most common human disease, residual immunity in the population helps to reduce its spread. Most deaths associated with seasonal flu occur among the very old, very young, or immunocompromised.

As compared to seasonal flu, COVID-19 is ten times more infectious and results in more deaths. 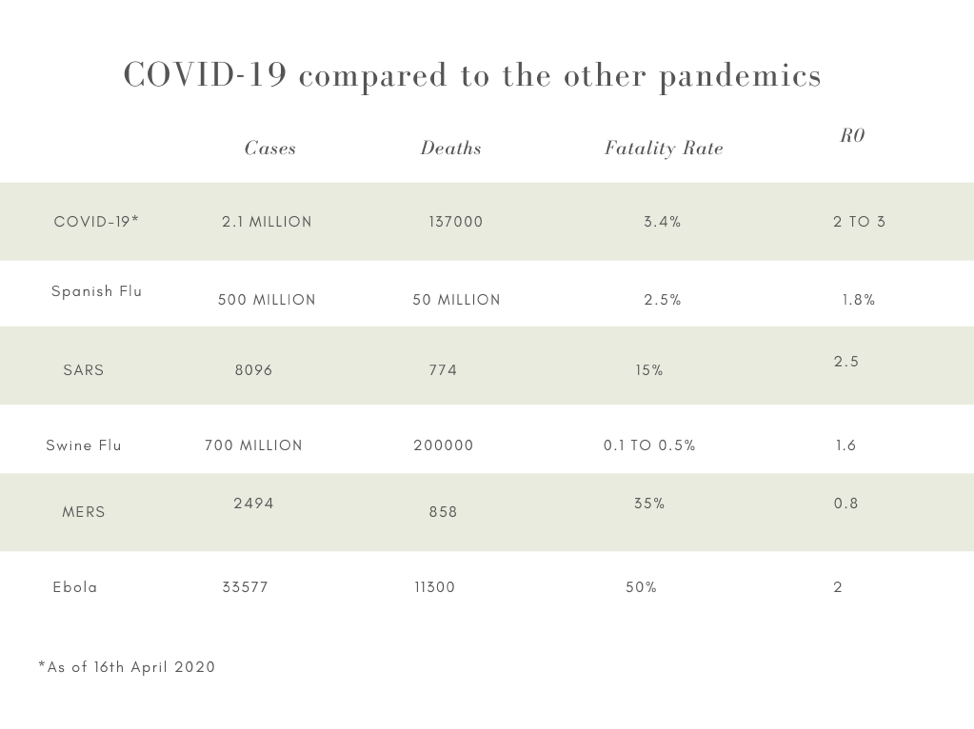 What Can We Learn From Past Pandemics?

While it’s preferable to have a set plan before the pandemic kicks in, the hard truth is we cannot prevent a pandemic from occurring. Past pandemics have taught us the importance of quarantine and the fact that the outbreaks may have a second and even third wave.

Past pandemics give us some sense of the trajectory of this specific virus, but since this pandemic is still active, it is difficult to assess the true scale of this outbreak. The present medical system is far more advanced to prevent infections and treat the diseases, but we don’t know how much the virus is going to vary in subsequent waves. For now, the global efforts and research seem to be the most effective methods to slow COVID-19.