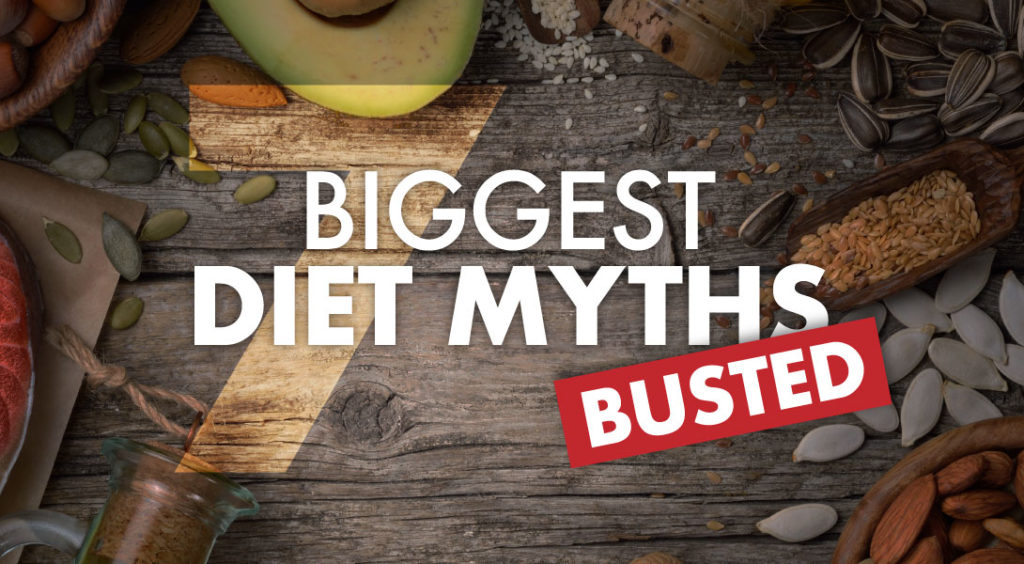 Most people try to eat as healthy as they can these days, but unfortunately there are many food myths around that make it hard to know what is and what isn’t healthy.

Anyone can post ‘news’ to their blog, and if this travels the internet often enough it becomes established as ‘true’, even when it sometimes isn’t.

A lot of ‘healthy eating’ information is correct, but let’s look at the often repeated and believed myths that are not.

Myths like superfoods and super fruits are just that…myths, and do no harm. If it motivates you to eat more fruit, that is good, even if you are eating it for the wrong reasons. These terms come from marketing, not from nutrition or health experts. The truth is that a simple banana often contains more nutrients than any ‘super fruit’, but a banana isn’t as interesting from a publicity or marketing point of view. Even so, if such a ‘superfood’ did exist in the plant kingdom, it would probably have to be kale which contains more nutrients than many other vegetables or fruit.

One example of this is coffee and tea, and the possible damage due to myths here is twofold. Decaffeinated drinks are healthier, right? That is what we have been led to believe for years. First the term ‘decaffeinated’ is misleading. It isn’t caffeine free, as some caffeine remains after the process is complete. In Europe a drink must be 99.9% caffeine free to be allowed to be called decaf. However, the international standard is lower, at 97%. In the United States of America, because the U.S. Food and Drug Administration doesn’t have strict regulations in place regarding decaf, you don’t actually know what you are getting. This means you are not totally avoiding caffeine, so if your reasons for choosing decaf are due to an allergy, you should avoid even decaffeinated products.

Red tea and herbal teas such as chamomile, ginger and peppermint contain no caffeine at all, so they are a good alternative, and are healthy too.

Beware of ‘natural’ decaf too, as it isn’t as natural as they would have you think. The same chemical, ethyl acetate, is used, but because it is derived from fruits, it is deemed ‘natural’, but the one typically used in the decaffeination process is synthetically made. Remember belladonna, also known as Deadly Nightshade, is natural. It is a plant. Toadstools are natural, so is arsenic, as it occurs ‘naturally’ in many minerals, but these chemicals can kill you.

Now, if you want to sweeten your tea of coffee, you may turn to artificial sweeteners, rather than sugar. Again, this is not necessarily healthier. Research studies have linked saccharin to cancer, and as a result, it had to carry the warning ‘saccharin may be hazardous to your health’, not so long ago. It was then decided, seemingly without further tests, that this might have not been accurate, and the requirement was eliminated. This decision seems a bit hasty and based on no further evidence. So which one is right? Does saccharine cause cancer or not? So far, the result is 1:1 in that debate. Do you want to take the risk? Saccharine is only one of many artificial sweeteners, and the jury is still out on final results. This makes ‘sugar-free’ and ‘diet’ drinks and foods, suspect.

Sometimes it is better to go for the original, in any form, be it caffeine, sugar or something else, and limit your intake, rather than trying a man-made alternative. The process for removing whatever substance is in question is sometimes riskier than the substance itself. This applies to ‘fat free’ foods too. Yes, they have less fat, but as the fat gives many products the flavor, to make the taste appealing extra sugar, sodium, and chemicals are added, so while they have less fat, they are also less healthy.

As the sales of bottled water soar, it seems like many people believe bottled water is better than tap water. Not always the case. Some bottled water is actually tap water with added chemicals. Tap water is generally strictly regulated, and any impurities must be eliminated. Not so for bottled water. Regulations regarding bottled water are generally not severe enough to guarantee the safety of anyone who drinks it. Chemicals were found in random tests on bottled, but these were explained away as ‘coming from the plastic bottle, not the water’, and it appears that satisfied the authorities as the water continues to be sold with those chemicals.

There are four basic types of water bottles:

Food labels in Europe must indicate when they are genetically modified, so consumers can make an informed decision when buying. In the United States, it is not required, so customers do not know what they are getting. Experts are still battling about whether genetically modified food contains dangerous substances that may cause cancer and allergies, so why risk it? Whenever possible, buy non-modified food to be safe.

Natural or herbal products are not necessarily safe. They undergo no form of control, and many may cause adverse reactions, so natural is not always synonymous with healthy. Even organic food is not exempt. It does not contain any more nutrients than normal food; it simply has been grown with natural, rather than non-natural, fertilizers and pesticides. Always remember to rinse vegetables and fruit before consuming to remove any harmful substances on their skins.

Food companies and personal blogs set up for profit will tell you what is healthy and what isn’t. They push products and ideas that let them earn the most money. In some cases, they take advantage of people’s desire to eat healthier.

Anyone can publish anything on the internet, where a lot of people get their information from, but there are few laws that ensure the information is correct, so always check your sources.