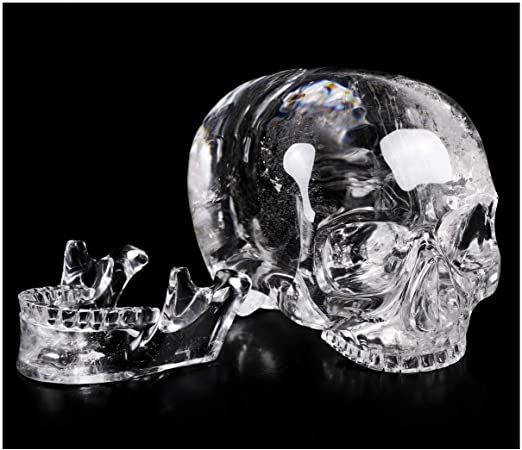 Mysteries and riddles have always been very exciting and attractive to humans. Whenever we read another story about something we do not understand, we hope that we can somehow solve the secrets behind it or at least come up with some hypothetical solution.

The mystery of the crystal skulls deservingly attract the attention of millions of people all over the world. These objects are so unusual that many popular editions dubbed them “the Main Find of the 20th century”! Perfectly polished, crystal clear, glowing in the dark. The true origin of the skulls is still a mystery. There is something about them that causes shock, awe, and admiration.

How were the crystal skulls found? Reports of crystal skulls began to appear in the world press around the mid-19th century. The Pre-Columbian valuables immediately aroused intense interest among a wide audience. The first crystal skull was discovered in 1927 by the famous English archaeologist and traveler Frederick Albert Mitchell-Hedges when traveling through Central American cities.

In order to truly understand how amazing these strange crystal skulls are, we need to immerse ourselves in history and briefly relocate to the lands of the ancient Mayan civilization. It was no accident that Frederick traveled to these amazing places where the famous Maya peoples lived centuries ago. Here, in emerald paradise, were the unique ancient relics created by the hands of the Maya.

To speed up the search process, it was decided to simply burn down the tropical jungle. On the ashes of the forest fantastic structures were discovered, stone pyramids and remaining walls of ancient cities. The Maya Indians even had their own amphitheater! Mitchell-Hedges began to call his find “the city of fallen stones“, which is what it is called today. With him was his 17-year-old daughter Anna, who was the one to discover a transparent crystal skull while walking through the ruins of one of the ancient Maya altars.

It was a human skull made of crystal – transparent quartz, surprisingly perfectly polished. There was one major flaw in the find: the skull had no mandible. But the value of the skull did not diminish, and the missing jaw was found nearby, in one piece, three months later. The crystal jaw was suspended on a special hinge made of the same crystal, and moved, if even barely touched, which was very exciting.

Supernatural at every turn

From the first hours of the discovery, the members of the expedition realized that they were facing something incredible and mystical. The first curiosities started happening with Anna who found the skull. That night she went to bed and put a crystal skull next to her bed before falling asleep. The whole night she was dreaming about the ancient Mayan people! She saw a clear and incredibly real picture of Mayan life – a dream the likes of which she had never had before. Her father, Frederick Albert Mitchell-Hedges, was shocked at how authentic his daughter’s “dreams” were. Being well informed with the historical facts of that era himself, he knew a 17-year-old girl just couldn’t come up with these, and she didn’t have that kind of knowledge before.

It took over three decades before the crystal skull fell into the hands of an international team of researchers. During this time, it was kept by the Mitchell-Hedges family, and only after her father’s death, Anna was able to transfer the skull to other scientists. Neither she nor her father could find a reliable answer to the question of the origins of the Mayan crystal treasure. The main question at the time was caused by the make of the skull itself, Its polishing was so skillful and perfect that it would be incredibly difficult to create one even in modern conditions with high precision grinding equipment. How could the Maya Indians, who lived a thousand years ago, do that?

Professor Dordland, an experienced scientist, found that an entire lens system had been implanted into the crystal skull with built-in prisms and channels, which apparently created the fantastic effects that the archaeologist’s daughter, Anna Mitchell-Hedges, observed. The prism located at the base of the rear of the skull reflects any luminous flux that enters the mysterious structure through the eye sockets. The tests were done with microscopes and other high-precision optics; no trace of grinding was found. It gave the complete impression that the object was cast from liquid quartz. But how? To get an answer, professor Dordland consulted Hewlett-Packard, already a well-known company at the time, which also specialized in producing quartz generators in 1964 and was a leading expert in the properties of quartz minerals.

In the winter of 1994, farmers in the American state of Colorado discovered a second crystal skull, which was immediately identified and handed over to researchers. In addition to the finding, UFO sightings were allegedly observed around the ranch, and there were reports of animals dying on this farm for unknown reasons.

Scientists were most interested in what crystal skulls are made for. Many theories were discussed, such as healing and clairvoyance. But most information about the “properties” of the skulls came from the owners of these mystical objects. One of them was Joan Parker, who got his crystal skull, as he said, from a Tibetan monk. Parker described in detail how he had successfully used the object for therapeutic purposes. After touching the skull, people would get rid of incurable diseases, discover new abilities, and rejuvenate themselves. However, not all people could use the “magic” of the skull.

Other stories claimed that the skulls were much older than the human civilizations that lived on Earth. Another interesting fact is that there are no mountain crystal deposits on the North American continent. Moreover, mineralogists immediately declared that mountain crystal of such high quality simply could not be found on our planet! What was truly shocking was the discovery that the skull was made from a whole piece of crystal. How was that possible with the complex system of lenses inside it?

But the technology for making these objects and the authors who made them are still not known.

Throughout the study of crystal skulls, researchers have certainly worked on more plausible versions of their mystical properties. Many mineralogists and crystallographers are still working on a hypothesis that explains the ability of crystals to store information. Its rigid structure, the unique spatial crystalline lattice of quartz “records” information like a gramophone plate. In fact, crystals are capable of storing almost unlimited amounts of information.

Crystals have the ability to store memory in the so-called thin biofield range, where they can keep and transmit information. The same crystal properties can provide a mysterious glow of crystal skulls, described by researchers and owners. PSI-fluorescence is a process of lightening that can be explained by the laws of physics.

In any case, the existence of many theories and many years of work of scientists still does not give an answer to the question: How was it possible to create such a super-complex device?

Today, the world knows of 13 crystal skulls. Nine of them are in private collections. Four crystal skulls are exhibited at the Smithsonian National Museum of Natural History in Washington, D.C., as well as at the Museum of Primitive Art in Paris and the British Museum of London.

Three of them were found in the jungle of Guatemala by Eugène Boban, an antique dealer and archaeological advisor to the Mexican emperor Maximilian. After numerous studies, they were found to have been manufactured in the 19th and 20th centuries: an apparent forgery. The last 13th skull was found in German Bavaria. It is historically attested that this specimen once belonged to Nazi General Heinrich Himmler.

The world is not forgetting the crystal skulls. They continue to excite minds and worry millions of people. The theme of crystal skulls with supernatural properties is regularly used in mass culture; for example, on the episode “Crystal Skull” in the television series Stargate. Steven Spielberg’s movie, Indiana Jones and the Kingdom of the Crystal Skull, focuses on the mysteries of the skulls. The story with the crystal skull is the heart of the television series Secret Circle. Mystical crystal skulls are involved in video games such as Corsairs, Sandra Fleming Chronicles, Assassin’s Creed and many others. Even the alcohol industry touched upon this: Crystal Head vodka’s bottle is in the form of the famous crystal skull.

We hope that sooner or later the mystery of crystal skulls will finally be revealed, and that humanity will finally learn what is inaccessible to its modern consciousness.