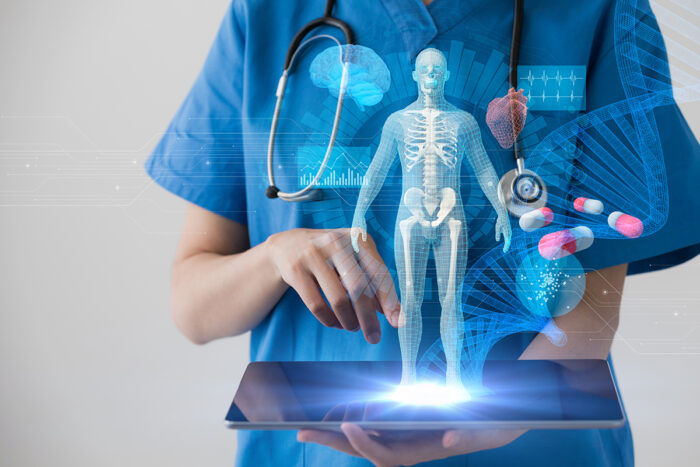 It is difficult to imagine life without the impact of the Internet and machine learning. Technology nowadays has defined our lives, but never more than in the practice of medicine.

You might be asking yourself how reliable computers are in making decisions about our health. What are the possibilities being offered? In this age of technology, artificial intelligence has no boundaries.

The purpose of AI is not to set man against machines, but to ease the physician’s burden and expand the possibilities of treatment to solve complex clinical problems and diagnosis.

Why is the algorithm intelligent?

In order to become a doctor, there are many years of medical schooling, exams, studying, receiving higher and lower grades, and more importantly – learning from mistakes. AI algorithms work in pretty much the same way: they must learn how to do their job.

In order for an AI algorithm to work, human intelligence is required to set the patterns, speech recognition, decisions over problems, and image analysis. Humans are the ones telling the computer how to work and what to look for.

Algorithms learn from the data that is first typically structured, and then perform either a probability or a classification.

Recent Advances of AI in Medicine

The traditional way of organ transplantation is a very long and painful path. Finding a donor isn’t easy, and not everyone is lucky to find one. Really soon, this will become a thing of the past.

Researchers from Tel Aviv’s University in Israel have just made a great breakthrough in medicine by printing a 3D heart that is made from real human cells. In the past, this was done only with non-organic materials like silicon.

Researchers have explained that the heart came from donors fat tissue that were transformed into stem cells. These stem cells were then differentiated into several different cell types in the heart. The researcher succeeded in creating the heart’s chambers and veins, something nobody had been able to do before. Researches intend to create 3D printed hearts that will be compatible for human transplants and that can regenerate defective tissue. Prof. Dr. Tal Dvir said, “This was the first time anyone anywhere has successfully engineered and printed an entire heart replete with cells, blood vessels, ventricles, and chambers”.

The cells that have been created have the ability to contract, but they can’t pump. Creating a cell that will possess the ability to pump is the next main challenge for the researches. But, compared with the traditional organ transplants, the method of 3D printing still offers many advantages that researchers are optimistic about.

In the normal process of organ transplantation, there is always a possibility that the body may reject the incoming organ. This is the immune system’s reaction, detecting antigens in the cells of the transplanted organ that are not compatible with the rest of the body cells.

So, how does it work? For printing this 3D human heart, human tissues are used as bioinks. A sample of cells is taken from the patient, and a 3D organ is printed with a personal hydrogel made from their own cells. This will potentially solve the rejection issue.

3D printing in medicine has been also used for developing new medicines. For instance, doctors can customize it instead of giving a one-size-fits-all medication. A team of researchers at the Mc Master University in Canada has been able to develop a rapid magnetic 3D bioprinting system. This system builds a replica of a cancerous tumor for a period of six hours. Their goal is to test different drugs and treatments in various doses to see which one works the best. After the lab testing, the patient will actually receive a tailor-made treatment program. This method would decrease the side-effects and increase the chances of survival.

3D printing is a very promising method for the health care system and for human lives.

After this algorithm, a second one called LYNA (Lymph Node Assistant) was developed by researchers at Google AI Healthcare. This algorithm analyzes histology slides stained tissue samples in order to differentiate metastatic breast cancer tumors from lymph node biopsies. The LYNA algorithm can identify suspicious regions that are not distinguishable to the human eye in the biopsy samples. LYNA passed the tests on two data sets and showed 99% accuracy with cancerous and noncancerous samples. With LYNA’s help, the average slide review time is now halved.

It is predicted that the role of artificial intelligence in medicine will continue to grow drastically. But experts and researchers warn that the growth must be step by step, since the machines’ “brains” are not thinking logically like the human brains.

The key to creating an algorithm that will be functional and practical in medicine is a real understanding of the possibilities by physicians. As much as the algorithm might seem perfect, errors are always possible that can be solved and improved by the widespread audience. Setting up stable relationships between doctors that have the knowledge and the programmers that create the algorithms, it will be less likely for an algorithm to learn to make incorrect choices.

Implementing artificial intelligence in medicine is a real challenge, but it is worth trying in order to increase the accuracy and efficiency of medical practices for numerous diseases.

The only question that can’t be answered yet is, How much longer can we possibly extend human lives by replacing body parts?